The primary goal of the Hudson Valley Raptors Fastpitch Softball Program is to develop athletes of character and integrity who will serve as positive members of the community and the greater society.  As a program, our goal is to create an environment where athletes are able to grow as leaders, competitors and teammates.  Our mission is to establish a Softball Program with a tradition of sustained excellence, both personally and athletically.  The Raptors Coaching Staff will be dedicated to maximizing an athlete’s performance and to prepare them to play at the next level. 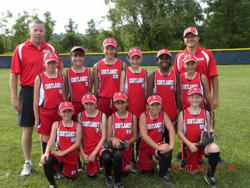 Originally started in 2011 by John Barbelet and Jack Servedio, as a Cortlandt Softball Little League Williamsport 10u Team,  the Cortlandt Crushers. After a few years and some evolving in 2014, the Crushers took on a new shape as well as an additional team and became the Hudson Valley Raptors.

Over the next couple of years board members, Chris Gallello, Michael Kayo and Will Salerno were added. The teams began to multiply with the Raptors players growing and progressing. Then the Raptors became part of bigger success In 2015 when Hudson Valley Fastpitch Incorporated was born. A NY state recognized 501c3 Non-Profit organization.

Fast forward to 2019, and Hudson Valley Fastpitch Inc. continues to grow, and is now 6 teams with almost 100 players. A huge leap for an organization which started with a mere 12 girls. The addition of indoor winter training by former NCAA National Champions like Ryan Iamurri and Cassie Reilly-Boccia from Alabama U, and Cortlandt/Hen Hud Alumni and USF 4 year starter Cassidy Boyle, along with some great coaches who understand the game, and playing at a higher level, success was becoming more of a reality. The sum of all these parts for HVFI is a truly amazing softball organization whose primary focus is engaging and growing talent, without shrinking a family budget.